Thanks to always motivating, Carol, for sharing this training “tip” from Biggest Loser’s own Bob Harper.  Then I am off to start my day of workouts and I’ll be #*@)#*@#&@$&$@ if any of them are gonna get the best of me!  How bout you? 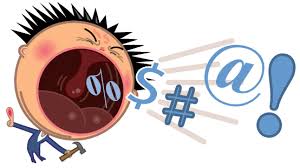 “Biggest Loser”trainer Bob Harper would like to get you back on the health-and-fitness path. And he’d like you to do it by talking to your food. And to your treadmill. Actually, he would like you to scream profanities at them.

Welcome to Bob Harper’s ” … You ” diet. (You know what the expletive is, people, but we are not allowed to write it out on our website, so use your imagination.)

The rules of this diet-and-fitness regimen are very simple. In fact, they are the rules that Harper says he uses when he is tempted to indulge in a piece of chocolate cake, or skip a workout and sleep in. Instead of giving in, he gets mad — and then he starts cursing like a sailor. He suggests you do the same.

Let’s listen in as Harper takes a break from filming Season 13 of “The Biggest Loser” to give us an inside peek at the renegade techniques he uses in this never-to-be-published diet:

“If your friends are eating that chocolate cake and you know it’s not the day you are supposed to have it, say ‘ … that cake!'”

Put on your swagger jacket and let rip, Harper says. That cake doesn’t have any power over you. That’s an inanimate object sitting on a plate that can be tossed in the garbage with a flick of the wrist. How can something so insignificant have any power over big ol’ you?

Though it sounds like Harper is joking around, he’s deadly serious. Such verbal self-coaching, while unconventional, will help you break the spell that the chocolate cake, French fries or any other indulgence might hold over you, he said.

This self-coaching also work in reverse — use it to get your workout game on, he said.

Let’s listen again as Harper gives an example of how he revs himself up to hit the treadmill when he just doesn’t feel like it.

Harper said such measures, while extreme, can work if people put some emotion into their words.

For more from Bob, Biggest Loser, tonight…8pm or set your DVR!