It was finale night on BL, last night, and since the show was only an hour, they pretty much cut right to the chase.  We got to see all the eliminated contestants and then they went right to the weigh in.  I was disappointed they didn’t bring them in with their partners, but instead mixed them all up (no doubt according to weight loss).  While most looked like they still had some weight to lose, they all did really well.  They must have incredible support at home, as the least amount of weight that was lost by a contestant was just under 26% of their weight.  That was Grandma Nancy, and at 161 she looked pretty good, but in that group of weigh ins, it was her granddaughter, Cassi, who lost the most…92 pounds or 38.49% of her weight.  She colored her hair and looked nothing like the quirky girl who came to the show 7 months ago.  Even Daphne and Adrian did well at home, losing 88 and 108 pounds respectively.  Emily dethroned her best friend Cassi, by ONE pound and maintains her lead after Megan, Kimmy and Gail weigh in.  Then comes the final group.  Lauren looks nothing like her old self, either, at 157 pounds.  Roy is no longer Santa like at all and Chris looks even better than when we last saw her, down 32.08% of her weight.  Finally, a very, very lean Mike gets on the scale and it is obvious he is going to blow up the scale.  He is literally half the man he was when the season started, down 160 pounds!!!  Having lost almost 45% of his weight, he takes home the at home winner prize of $100,000.00  SOMEONE TELL ME WHERE HIS SKIN WENT?  He had NO skin hanging anywhere.  How do you lose 160 pounds in 7 months and have no skin?!?!?!  Help me out on this one, please….

And now it is time to weigh in the final 3.  Conda still looks heavy and weighs in first down 115 pounds.  Her brother, Jeremy, who definitely could have worn a more flattering jacket, is down 199 pounds weighing in at 190 having lost over 51% of his weight!  Crazy.  Kim looks like amazon woman next to them.  Very tall and very dressed for a night out at a club, she must be very thin in real life, as she weighed in at 134, down 118 pounds.  She has a dynamite body, but I knew she couldn’t lose enough weight to win, unless Jeremy had blown the whole thing at home. 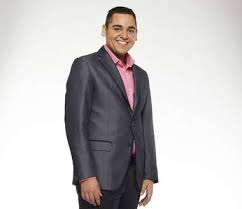 So the confetti falls on Jeremy and he is the newest Biggest Loser and $250,000 wealthier than he was yesterday morning.  I am more than certain he will split that with his sister.  He has shown himself as a good guy, the entire season. He still looks like he has a bit of weight to lose, and I hope they continue their work at home.  We got the bonus of seeing newlyweds Stephanie and Sam (ah, Sam…I hope he is ok after his horrific fall.  I am not sure that he is?!?  He looked a little distant to my eye…anyone else?)  Very excited to see them married.

All and all this was one of my least favorite seasons of BL, but still I will miss it this summer. Would love to hear your take on all this!